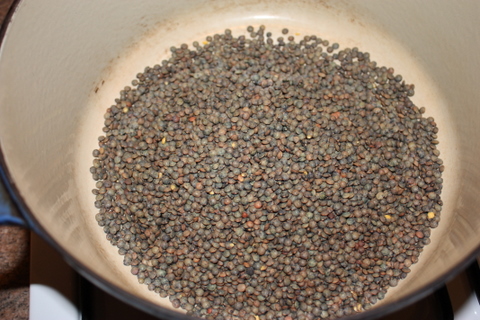 Sure, I have eaten lentils before, and sure, if you know how to accompany them with the right spices, they can taste amazing. However, I don’t.

So…I thought I would experiment with the humble lentil this year, and expand our food repertoire a little from the rice/pasta/mash bases to include this pulse.

My memories of earlier experimentation with lentils occurred when I was at university. Of course, being a poor student, and living away from home, this was my first experience of actually having to fend for myself – on many fronts. I loved it.

I am the second eldest child of four, and mum was a stay at home mum for most of my school years, so the kitchen was usually running hot, and there wasn’t really much room for experimentation. I came of this and went to college in country Victoria, and although I had a good understanding of how to cook (probably better than some people who for instance, could make pancakes or bolognese), I had no idea about quantities. I could easily whip up a meal for 6 people, but had no idea what to put together for one. And if I did whip up a meal for 6, then unfortunately I had to eat it too…..

I moved into accommodation with another student Sue, who decided she was going to be vegetarian, and we shared cooking. There was lots of experimentation, let’s just say, some massive disasters (like the time Sue decided to cook chicken for guests, but let’s just say only cooked each side for 2 minutes because that’s what you do for tofu, to then watch the guests all shudder at the sight of bloody raw meat, and leave it uneaten – all when you are dying for a piece of protein – unforgettable!). We were your typical students, making do with the cheapest foods you could buy, and I would say we ate vegetarian for most of the year. By the end of it though, I was fanging for something with flavour.

If only I had discovered some decent spices – I might have explored the Lentil further.

I made a lentil salad recently – massive hit with Tom…so much so that when he came home recently from traveling, I made it for him as a surprise (sad really). He thinks it tastes as good as meat. The kids don’t love it, but they do eat it, so it’s one of those things – not as bad as my early childhood broad bean experiences, and not as great as lasagna.

We went to dinner at my friend Lara’s house the other day. She’s on a “no red meat, no dairy and no wheat diet”. I am SERIOUSLY considering not having her as a friend anymore. I mean honestly, what is there left to eat? I took this lentil salad, and both Tom, Lara and I ate it. Lets just say, not everyone else was raving about it.

Anyway, after a slight mishap in the bath tub that night (involving one of my children, two of Lara’s and a ‘floater’) I dare say I won’t have to worry about my next invitation.

Anyway…horror stories aside, I think the lentil has big potential, and I am keen to expand my recipes to include more. If you have any favourite recipes that you are happy to recommend…then I would love to know about them. Here’s my Lentil salad recipe!