When I was a child Dad grew most of our vegetables in community garden plots by the Tullamarine freeway. Being Dutch (and having lived through a recession in Europe after World War 2) Dad was highly affected in his formative years with a lack of food. This translated into the following sorts of behaviours (some I actually thought were normal until I got older):

I am not taking the mickey out of all of these behaviours, I grew up with them, I thought they were normal (except for bathing in the dark which I knew was weird!). Some of them are very sound practices, and I suspect things such as growing your own food are things I would like to be doing more of. These practices result from have had it really tough. I am sure these behaviours were necessary for your survival in the 1950s. Today I feel we have gone to the other extreme and I am sure the truth lies somewhere in the middle.

So…what has all of this got to do with broad beans? As a result of Dad trying to get the maximum yield out of every crop, he would grow his broad beans to be as large as possible. As a child I was abhorred by them. I remember Mum used to hide them under the mash. I could sense when she had done it – you could tell she was up to something!

I recall trying to peel the leathery skin off them, and then trying to swallow them whole with the aid of a glass of water so as not to have to bite into the starchy insides. Eeerrggghhh!

My eldest sister Kirshten (who could best be described as a model child, school prefect, did as she was told etc) wasn’t even able to stomach them. I recall her executing her most elaborate scheme to avoid eating broad beans. She placed a napkin on her lap, and pretend to cough during the meal and drop each bean into the napkin as she did. Then her coughing fit then unfortunately got so bad that she conveniently had to bolt outside and dispose of said beans. (Mum, if you area reading this, it is true. Kirsh, suck it up. I covered for you then, but now that you are 40 you can fend for yourself!).

As a result of these rather traumatic broad bean experiences – I had avoided them at all cost.

Then one day I discovered that broad beans are:

I also think that broad beans are one of the most beautiful coloured vegetables. When you blanche them and peel away the skin, they are have such a lush and vivid green colour. Sitting down peeling them can be a cathartic experience. 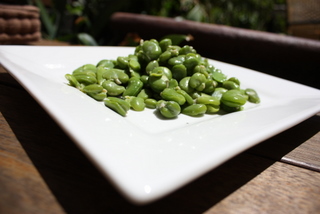 My son bought some beans home from school this year, and we pushed them randomly into the garden during winter. Each bean sprouted into a beautiful plant, and we yielded plenty of beans.

A few months ago, I dug up my Persian recipe book The Legendary Cuisine of Persia and created my favourite Green rice. There is something about eating food you have grown yourself. I will attached the recipe and instructions next time I make it. I also went on to experimenting with a lovely broad bean salad, which is great for summer.

Makes me think – if I don’t like something, perhaps I should try giving it another go. Maybe I have just had a bad introduction to it.

Late edition (7/1/10): More on broad beans (aka Fava Beans) from a permaculture website. See it’s not just me that thinks they are amazing!